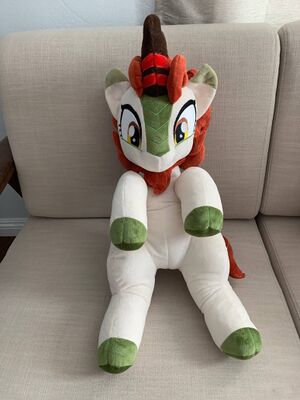 KLPlushies and NekoKevin have been known to submit their patterns to Chinese manufacturers and the plush they sell you may not actually be made by them, but rather are made by a small workshop of 1 or 2 people in China. Fabric used is chinese minky, which is softer and more stretchy than Shannon minky, making for a unique feeling plush, but much more floppy detail in areas like the muzzle. Owners have said the plush make a softer, more squishy toy to hug and cuddle. Details, such as mane attachment points and folded wings, are often attached with a single, thick thread that is knotted on each end, and can sometimes come apart if pulled firmly or over time.